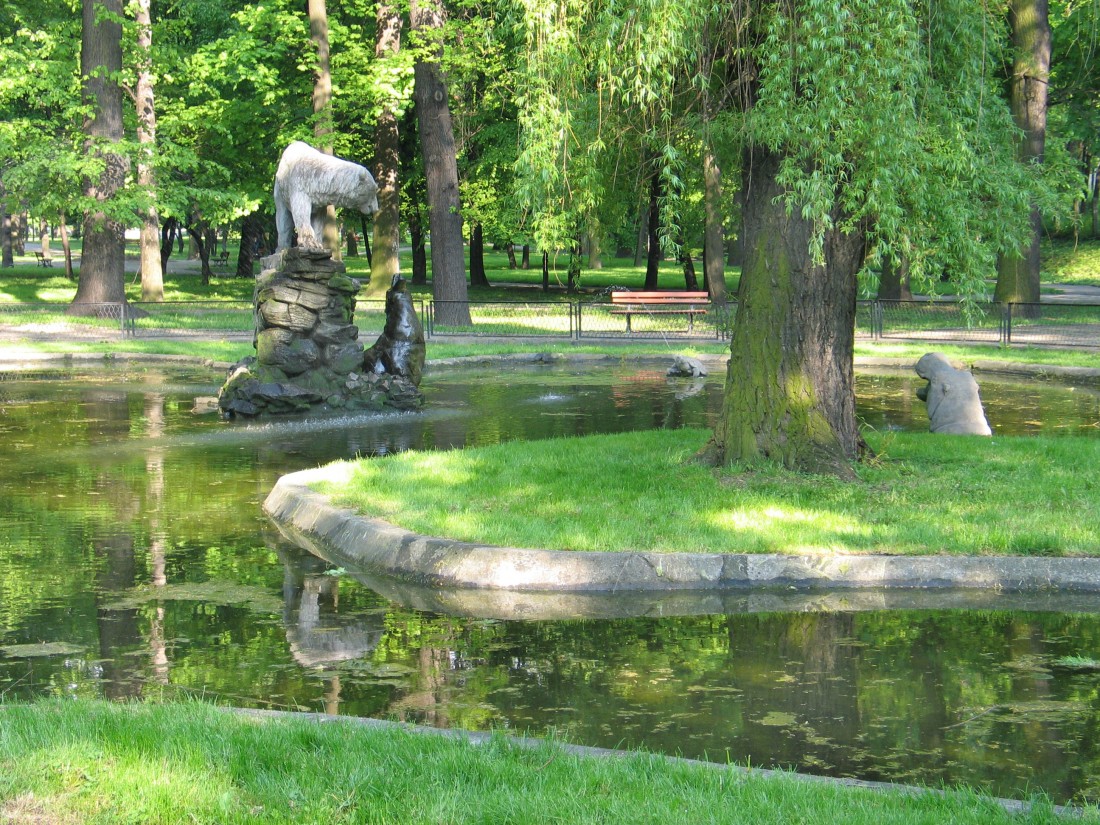 Town park is situated in the southern part of the town, from the west to the east, along the Psina river. The foundation was achieved thanks to the councillor and doctor Joseph Lauffer. He came up with a proposal to dry the swamps and remove the second bed of Psina, which used to flow through the park. Its oldest part is the eastern one, beginning by the post office and ending by the fountain with stone animals. In 1882, so called “The Victory column” used to stand here. It reminded Prussian victories in battles of 1864, 1866 and 1970 – 71. After World War II the column disappeared and a new obelisk with a Russian soldier was built on the pedestal. From the northern part of this old promenade, there is a bulwark of the 13th century, which is the best preserved bulwark in the town. It is ended by a renaissance copula.  Beside the bulwark, a defensive ramparts rebuilt in 1980´s is located. After World War II, the buildings standing here were destroyed and a new playground was established here. By the Nový Svět (Nowy Świat), another half - reconstructed bulwark of the 13th century is found.

The most interesting part of the town park arose between Parkova and Cyna Streets by the filling up the second bed of Psina river in 1844. In this part, nearby the Walowa Street, the memorial of the park founder, Doctor Josef Lauffer, was built. The author of the memorial is a sculptor Menzel from Nisa. The memorial was fenced in 1895. Another attraction is a fountain with animals made of stone built between 1911 and 1912, dedicated to Glubczyce town by the brewery owner Eduard Beyer.  The memorial “Filozof z lesa” (Philo von Walde) by a famous Silesian folk poet Johannes Reinelt (1858-1906), born in Goluszowice (Kreuzendorf) nearby Głubczyc is also much appreciated. It was made of Silesian marble and granite by Josef Oberth from Jeseník between 1922 and 1923.

Behind the memorial, just on the other side of the Parkowa Street, there is a boarding house of integrated secondary schools, focusing on agriculture, built between 1903 and 1904 as a poorhouse. The work of Paul Ondrusch, the mother of God with a child is inscribed into the sandstone on the house frontage.

In 20´s and 30´s of the 20th century, the youngest part of the park arose according to design of the local construction advisor, Paul Klehr. It concerns the part of Powstancow Street to “Svatyně Přemýšlení” (Swiatynia Dumania), than towards the stone summer-house on the west of the town also known as “Hřib”, which then continues northwards to road to Gazdowice