Church of the Birth of Our Lady Monastery of Minorites 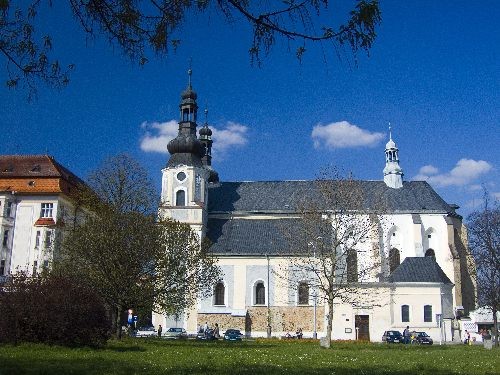 The history of the Monastery of Minorites and the adjacent Church of the Birth of Our Lady, building one complex, has been closely connected with the history of the town of Krnov since the end of the 13th century.

The Order of Friars Minor, called Minorites, seek to follow most directly the manner of life that Saint Francis led. It is a mendicant religious order of men tracing their origin to Francis of Assisi. Their distinctive clothing is black frock tied with a white rope at the waist. On the rope are three knots symbolizing three rules of this order: Poverty, Obedience and Chastity.

According to the tradition, the monastery is supposed to have been started in 1273 during the reign of the Czech king Přemysl Otakar II. The monastery had the greatest significance in the 15th century when it was a residence of the provincial superior of the Czech-Polish ecclesiastical province of Order of Friars Minor. In the middle of the 16th century, during the Reformation according to wish of Georg Hohenzollern von Ansbach, the new ruler of manors of Krnov and Glubcyzce, the Minorites were displaces from the town. A mint was established in the monastery and in the church grain was stored.

Minorites apparently returned to Krnov in 1650. To commemorate this event, they first got permission to build a wooden chapel on the hill Cvilin and in 1728 built a Baroque Pilgrimage Church of Our Lady of Sorrows at the same place.

Krnov suffered of many fires. The most destructive fire in history of the town caused Prussian troops in April 1779. The fire destroyed several valuable buildings including the gothic church, Monastery of Minorites, the renaissance town hall as well as the royal palace. Most of historical buildings have been rebuilt. The Church of the Birth of Our Lady got baroque appearance preserved up to this day.

In 1950 the monastery was abolished and the building served as a hotel “Morava”. During that period many inappropriate interventions into the exteriors and interiors demaged a lot of unique artistic and historical relics. In 1989 the monastery was restored again. Nowadays we can usually meet the “Friars” in the streets of Krnov.

The oldest part of the church is the chapel in the south. There was originally the building of the monastery which has been later built at the north side of the church. The monastery is supposed to be burned.

After a parochial canonry in 2000 was restored the community life of Minorites. Part of the convent is used as accommodation facility called Bethany.

In the interior of the monastery, we can still see beautiful frescos by the painter Josef Stern, dating from 1765 to 1766.