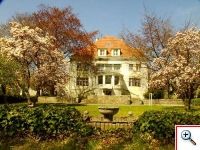 The reconstruction work on the Flemmich Villa, the architectural jewel of Krnov in the district of Bruntál, has finally been completed, and, for the first time in its history, it is now open to visitors. The residence is situated in a beautiful garden and is now used as a cultural centre, hosting a range of exhibitions and other cultural events.

The villa is named after its original owner, the textile manufacturer Theodor Flemmich. Theodor Flemmich had the villa built as a family home in 1914. The neo-Classic residence was built according to the plans of the Viennese architect Otto Prutscher. The ground floor, with its winter garden, entrance hall, gentlemen’s room and hunter’s trophy room, was used for social purposes. The first floor served as the private quarters of the owner’s family. Utility rooms, such as the kitchen and laundry, were situated in the basement.

The former family estate of the well-known Krnov factory owner Theodor Flemmich is be the main exhibit of a museum to be created here, together with an exhibition of individualistic modernist art.

Theodor Flemmich’s family lived in the villa until it was nationalized. For the next three years, the town of Krnov accommodated eight families in the villa and then, between 1951 and 2003, the entire complex of buildings, together with the garden, served as an orphanage. Subsequently, the villa became the property of the town of Krnov.