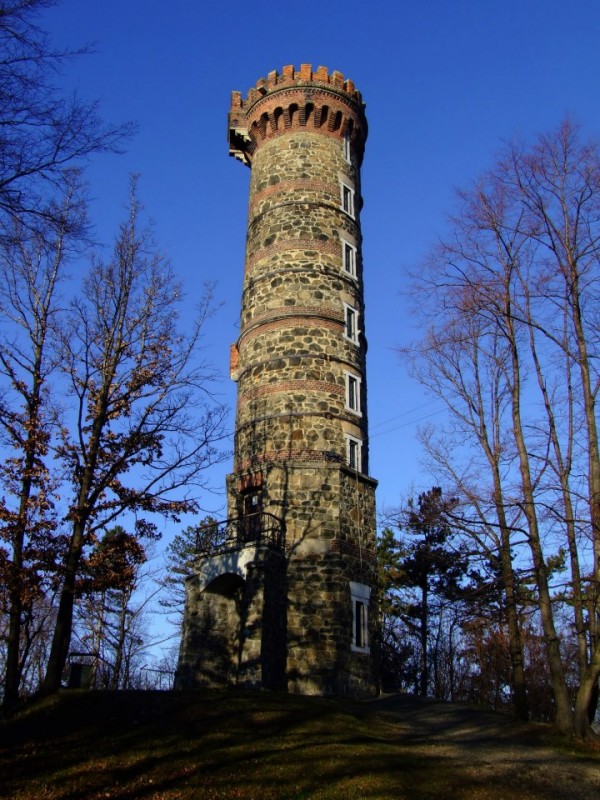 The stone lokout tower is a completely dominant feature of the Front Hill of Cvilin (436 m above sea level, 144 steps).

It was built at the beginning of the 20th century by the Krnov section of the Moravia-Silesia Sudeten Mountain Club according to the design created by the architect Ernst Latzel. But then it looked much more ornamental than nowadays. Above the basic cylindrical tower with the observation deck at the height of 25 m, there used to be a narrow side spire that covered the exit of the staircase and also enabled one or two people to have a circular view from a place that was even 5 metres higher. At the opening ceremony, held on June 11, 1903, it was named the Liechtenstein Lookout Tower in honour of a wealthy patron without whose generous donation the lookout tower would not have been built. This unique spire was destroyed during the repair work that was carried out after the war. In the 60s it suffered the same fate as many other similar buildings, aerials of a television transmitter were placed on its top. They were removed only recently during the total reconstruction. The lookout tower provides a wonderful view of Krnov and its surroundings.

Certificate and other souvenirs can you get at the lookoout tower  or in TIC in Krnov.

On green marked footpath cca 3 km far from the town centre of Krnov, leading on the Opavská Street. On the first crossing turn right and follow the Dobrovského Street, Cvilínská Street and Městská Street.  You can visit the lokout tower on this route. It is possible to go by car to the boarding house Šelenburg and then cca 1 km on foot through the wood on green marked foothpath. It is located on the nature trail Cvilín (see Nature – Nature Trails).