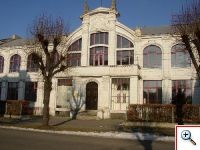 Commercial building of the palace was built in Art Nouveau in 1907, designed by architect Eduard Frank and served as textile stock market. On the turn of the 19th and 20th century Krnov became the center of the cloth production of the Austro-Hungarian monarchy.

At that time a bold and modern engineering design of the building is covered with an impressive decor of Art Nouveau.
The hall on the ground floor was mainly used for commercial purposes. It is possible to climb up on a wide stairway leading from the hall in the ground flour into the hall upstairs, roofed with a wide span steel structure. This hall was used as a working space for the clothing department. There is one room with stucco decoration, wooden walls and doors preserved in its original form.  The wide cellars have been partly used as storage of goods and crates, partly for placing of looms.

The war did not cause any significant damages, except of some broken windows. From 50s to 1990 the palace served as a textile warehouse. The Palace Silesia is considered to be one of the most important architectural gems in Krnov.