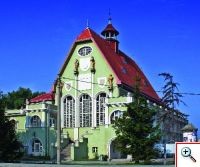 Shooting house is the third one in this place. It was built in the years 1907-1908 in honor of the sixty anniversary of ruling of Emperor Franz Joseph I. It has been built by Joseph Hartel according to design by Leopold Bauer, a Viennese architect and an important native of Krnov. It is a standalone building with stucco and rich sculptural decoration. In the front gable there are life-size statues depicting medieval archers in period clothing.

There are many rooms inside, a large hall on the first floor. On the ground floor is situated a smaller hall, which was originally used for shooting purposes. From this shooting range was shot at targets in the garden, protected by mounds and walls. The Shooting Club became the most popular organization in Krnov and existed even till the era of the First Republic.

The building served not only to The Shooting Club, but also for holding many festive events.

After the Second World War its property was confiscated and after the Pioneer Organization was founded in April 1949 became to “Pioneer House”. In 50 years of its activity was led by many providers, legal forms and general managers.

In the 70s were made a total devaluing repair of this building. Further repairs were carried out after the devastating flood in 1997.

The last major change occurred after 1989, when the name was changed into “House of Children and Youth” (DDM). In 1997 the name was added to word “Bear” and since then “Bear” has been strongly linked with this institution. DDM Bear focuses on leisure activities for children, youth and adults. Nowadays it is led by the town of Krnov and the institution is called “Leisure Centre Bear”.

Shooting has a long history in the town. Its origins date back to 1425. First shooting range was situated under the city walls, near the moat and bastions. In 17th century to improve the conditions for shooting training was used the first shooting shelter standing in a garden in Stará Street.

The second one was built a little further out of town in Dobrovskeho Street. It was bigger, had a living area and gathering room and downstairs shooting stands. In the garden was established a restaurant. The great hall on the ground floor was used for feasts, social events and theatrical performances. In summer, the theater performed in the garden behind the house. On 1st May 1890 was held in this garden a great celebration of Labor Day by the participation of 7.000 workers. In the early 20th century didn´t suit more for a large number of shooting enthusiasts.

Nowadays there is still the Shooting Club that brought up many representatives and champions of the Czech Republic in various shooting disciplines.