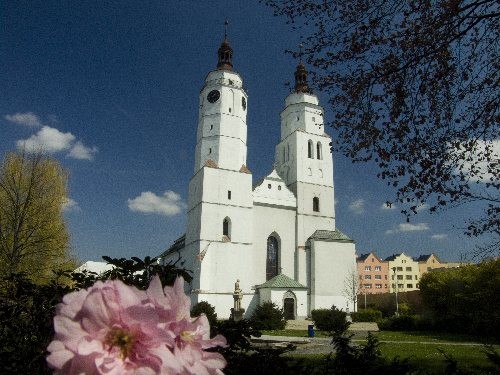 The oldest history of the St. Martin´s church in Krnov, substantiated in writing, dates back to the turn of the 13th and the 14th centuries, when it was taken over by the Teutonic Order.

On the turn of the 14th and 15th century the original wooden building was rebuilt to a church of stone.

The church originally had one tower only, which is still evident; the second tower with a gallery was built in the 16th century. It was called "town tower", and served to a lookout for his beats.

Two towers of different appearance became a signifiant part of the local protection system. They both are about 67 meters high.

In 1779 the town was affected by huge devastating fire that gutted the church as well. In the 1880s, the interior of the church was completely rebuilt in a Baroque style. The final face was made by Heinrich Haucke.

In the north part of the church, there are valuable renaissance tombstones dating from the 16th century. In the side chapel, there is a polychrome tombstone of Kryštof Bilický from Bilice, the court doctor of Polish origin.

Next to the church, there are a Marian column with the statue of Virgin Mary Immaculate dating from the 18th century and an arcade wall, also called a Swedish wall, with stripping battlements from the period of 1523 – 1543.

Nowadays you can see and hear as well organs originating in 1904, made in Krnov.

The church also holds a secret. When, in 1967, repairing the electrical wiring inside the church had to start digging in the floor and what was a surprise when he suddenly appeared two crypts in the underground, and there several coffins with the remains of dead. After examination it was found that there had been buried prominent citizens of Krnov. The crypts were covered by a pavement after the research again, because everyone resting there deserves an undisturbed rest. In the rear part of the church also appears an entrance to a mysterious underground corridor, leading according to legends under the whole town and ending up under the ruins of the former castle of Cvilín, called Šelenburk.

In 2008 the congregation celebrated the church of St. Martin´s 100th anniversary. In autumn 1908 was founded the Temple Music Association, which begins the tradition of spiritual music in Krnov. The choir usually performing by religious services, performed in many concerts, not only in church, but also in the hall of Hotel Tiroler.