Swedish Wall and Fountain of Neptune 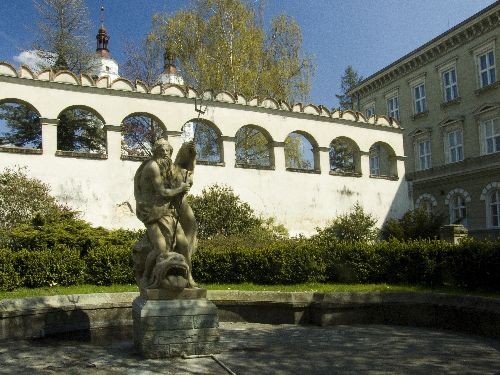 Swedish Wall is the strongest part of town wall of Krnov, which has hang over to the present. It was named after the enemy besieging our city during the Thirty Years' War.

It is a Renaissance arcade brick wall with lunette battlements. It was built up on city stone wall. Originally, it was the wall of the royal corridor, built between 1523 and 1543. The royal corridor led from the castle, passed the upper gate, provincial house and ended as an extension of the town wall in the royal garden.

Under the wall there was a deep moat filled with water. In the second half of the 20th century it was thought of taking down of the rest of the wall.

The fountain in front of the Swedish wall originates from the Castle in Slezské Rudoltice in 1750. There is the statue of Neptune inside the fountain. In 1995 the Neptune statue had to be removed from the stand and it has been restored in the atelier of sculptor John Gajda in Nova Ves in Ostrava. Nowadays it is to see in the European House on the Main Square in the town centre. The statue located here is only a copy.

There is a erratic boulder lying near the Swedish Wall that has been found close to Krnov.