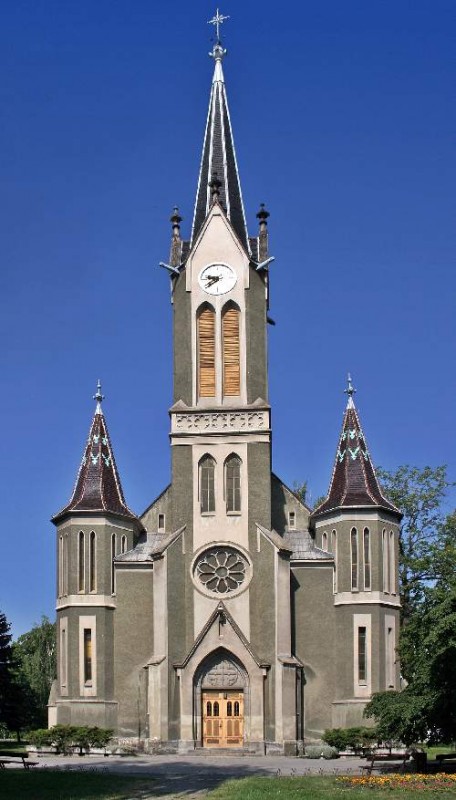 The evangelical religion in the Krnov region has been about 500 years old. In the middle age it was greatly disseminated by the margrave Georg Hohenzollern, also called Pious, a staunch proponent of the Luther doctrine, who bought the principality of Krnov from the Šelenberk family at the beginning of the 16th century.

At the end of 1890 proffesed 471 people to the Protestantism in Krnov. Because of rapidly rising number of Protestants, they start thinking about building their own church.

In 1898 – the Protestant charge in Bruntal became independent, and by the top religious council of 7 July, the filial charge in Krnov separated from Opava and associated with Bruntal.

The ceremony of laying the foundation-stone of the new church took place on June 28, 1901.

The church was built from 1901 to 1903 in the neo-gothic style by Ernst Latzel company, according to the plans by architect Blasch. At that time the Krnov evangelical congregation had about 700 members.

In the church tower (about 52 meters tall) were installed three bronze bells casted in the Gustav Schwabe company in Biala.

The organ built by brothers Riegrova, have 22 registers and two manuals in one pedal.

The windows above the altar were coloured and in the middle window was depicted Jesus Christ Blessing.

The construction of the church was financially supported by the Gustav-Adolf Society (GAW). The great merit in the construction and financial support, later the independence of the congregation as well, had Friedrich von Hake.

During World War II the church bells were removed for the war needs.

About 100 meter behind the church, there is a former evangelical parsonage built in 1907 (today it is residence of the district department of the Police of the Czech Republic). In 1986, the church was recognized a historic landmark.