The Holy Spirit Church with hospital 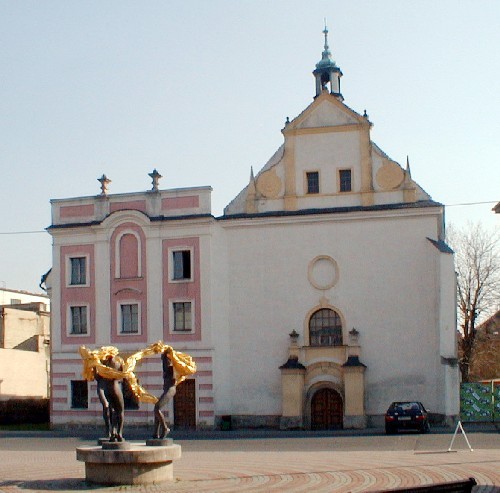 The church with the adjoining hospital is one of the oldest buildings in town, situated almost in the centre of the town. Its beginning dates back to the 13th century in the period of the Přemyslid princes and was connected with a need of a hospital for the poor and hungry. This was realized by The Order of The Teutonic Knights and consecrated to the Holy Spirit and patron saints of the old and the sick – St. Barbara and St. Elisabeth.  The Hospital was led by the Church that is why the monks took care of the ill.

Nearby the hospitals used to be built churches, because the main mission of the Church is taking care of the body as well as of the soul.

During the Reformation period, when the Catholic Church was persecuted, the hospital was replaced to the Monastery of Minorites.

The church was rebuilt in the Baroque style. Inside, there are unique wall frescoes from the end of the 14th and the beginning of the 15th century, painted by an unknown painter.

Nowadays it is used as a ceremonial hall for social events of the town (e.g. auctions, leaving school ceremonies, meetings with famous people, public fora), and as a concert hall. Many concerts are organized in the concert hall throughout the year. The peak of the season is undoubtedly a music festival called the Krnov Music Festival. A lot of famous artists have taken part in the festival in the previous years, e.g. Eva Urbanová, an opera singer, or Jiří Stivín, a flautist. The place is literally filled with spiritual atmosphere which, in connection with music, leaves an unforgettable impression on the visitors.

The sculpture in front of the church is called "Joy of Life" by Olbram Zoubek, a Prague sculptor.

It is possible to order the church viewing in TIC Krnov.