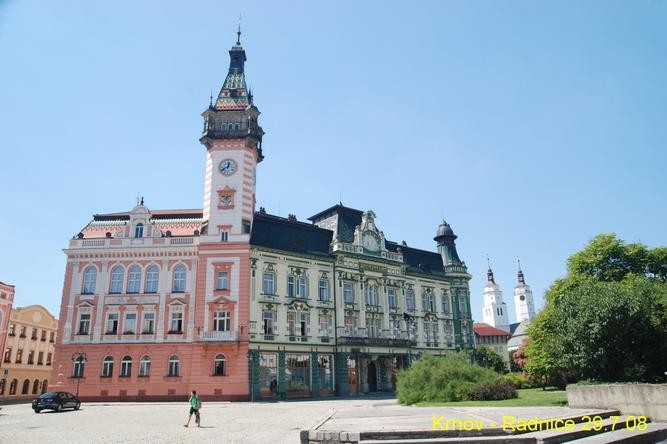 Today's Town hall as it is preserved was built in 1901-1903 in the neo-Renaissance spirit spiced with Art-Nouveau elements according to plans by the Viennese architect Moritz Hintrager. Construction was carried out by Ernest Latzel and Alois Geldner. The building stands on the grounds of the former Town Hall from the 16th century.

It is a two-storey three-winged building with a mansard roof. Western short wing on the north ends in a six-storey tower. The tower is 52 meters high and is a true copy of the Town Hall tower in Währing in Vienna (the 18th dictrict). The whole tower covers high hipped roof with a lantern at the very top. The roofing is composed in a very interesting colorful way.

The Town hall clock originated in 1864 is a masterpiece of J. Mannhardt., a famous Munich's watchmaker.

In 2007 it was fully renovated. By the opening ceremony on 15th June the Mayor on this occasion said: "Krnov town hall clock was far-famed because it always goes wrong, which does not contribute to the positive image of services provided to citizens by the Town Hall Office. When the clock at the town hall goes wrong, what could you expect from such an office?"

Generous town hall project by the architect Leopold Baeur, native of Krnov, whose manuscript still bear some significant buildings in Krnov, was rejected by the Town Council. The new Town Hall building aroused inconsistent opinions, some people did not like at all. However this building became certainly one of the most significant symbols of the town.

Crime has always attracted the attention in every era and society. Therefore, the court met at the town hall consisting of aldermen and a town reeve. They pronounced judgments on criminals, including the death penalty. The gallows stood on the slope of Cvilín, at the range of the town. Criminals were usually beheaded with a sword. The last headsman was Ignatius Jausch, whose business ended in 1787, when the death penalty was restricted by Emperor Joseph II. The sword from 1709 is possible to see in museum depositories in Krnov. Public executions were liked by lot of curious onlookers.

There have been preserved the rules the citizens of Krnov should follow in times of Reformation, known as "Rules and regulations of the town of Krnov", originated in 1551.

To the Town Hall adjoin a three-winged and two-storey building of the Czech Savings Bank. It is typical for its richly dissected facade in Art Nouveau, built in 1906-07 following the design by Franz Blasch.

Both The Town Hall and the Savings Bank are parts of one building complex.  Moreover you can find in this building a café and a wine room.