Present of the hotel

At present time the hotel is used for commercial purposes.

History of the hotel

“Slezský domov“ Hotel plays an important role in the history of Krnov town. It changed  owners for many times and also underwent many modifications. The most extensive one was held in 1820. The hotel was given the name “U bílého koníčka“ and it was built under the condition of beautifying the town.  Sheds for horses and carriages were aslo a part of the hotel.

The later owner of the guesthouse Johann Flemmich came from a wealthy family. He was apprenticed as a draper and then, like it used to be at that times, he left the country for the world to get some experience. He very liked staying in Tyrol, especially local people and their habbits. This was the reason why he, after return to his home town, enjoyed telling stories he went through to guests. He also started to wear a Tyrol folk costume, which he bought during his stay. He took a lof of care of his guesthouse, he built up a dancing hall,a skittle-alley and an outdoor sitting in the garden. By the entrance, an unusual picture of a dancing youth in a Tyrol folk costume and a robust shield welcomed guests. The guesthouse was also called “U veselého Tyroláka“. 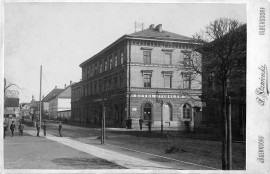 The hotel used to be a place of important social events. In 1889 Emil Holub, who was a famous Czech traveller, was having a lecture refereing to his exploratory voyages through South Africa. In 1890, the original Edison´s phonograph (predecessor of gramophone) was successfully introduced to public here. Contracts concerning coloured cloths were signed here.

In 80´s of the 19th century, an operetta became more and more popular. It was impossible to run a small theatre situated close to the St. Martin church. Therefore the owner of the “Tiroler“ Hotel established a theatre hall with a stage.  A famous German actor Max Pallenberg  (performer of Švejk), later a Hollywood actor, was aslo performing in Krnov.

Curiosity of the hotel

On September 1 1872, an important architect of Krnov Leopold Bauer  was born in “U bílého koníčka“ hotel. At that time, the hotel was a property of his father Josef Bauer. Between 1928 – 1930 Leopold Bauer took part in the reconstruction of the hotel.

History of the health centre

Many suburban buildings had to be taken down in order to build up this building in 1924. A hospital insurance company used to be there, at present time the building operates as a health centre.

By the entrance, Sgraffiti picturing various crafts of Krnov citizens such as bakers, smiths, tailors, potters, shoe makers, brewers and hatters are found. 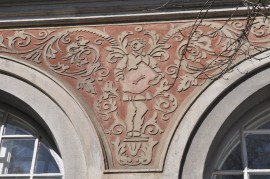 Curiosity of the health centre

The curiosity of the health centre is its little turret, which is a copy of a townhall turret, damaged at the beginning of the 20th century. 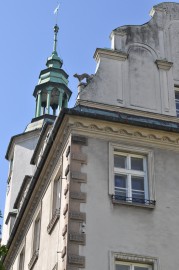