History of the palace 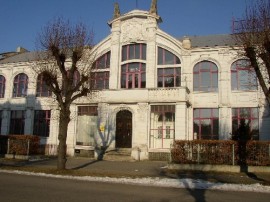 The trade fair Silesia palace belongs among architectural dominants in Krnov. It was built in 1907 in Mikulášská Street, designed by an architect Eduard Frank with the intention of being a textile stock.  The palace looked very modern already at that times. The building construction is made of ferroconcrete, covered with Art Nouveau décor.

Geiringer&Reitler company built up  the Silesia palace as  a textile stock of an European importance. The company operates in Austria up to now.

The hall on the groundfloor was used for commercial purposes. From the hall on the ground floor it is possible to use a wide staircase and reach the hall on the first floor, covered with a daring steel construction, lighted by richly decorated windows.  This hall was used as working area for clothing department. In the interior, a room in an original condition has been preserved, with stucco decorations, wooden partitions and doors. Large  cellar spaces were used both as warehouses of goods and containers and partly for weawing looms storing.

The original owners of the palace were Jewish businessmen, but post-war regime did not take into consideration giving back the confiscated property to Jewish families.

The palace used to be a textile warehouse until 1990, then it was privatized.