Swedish Wall and Fountain of Neptune and Grammar school

Swedish wall is the most significant part of Krnov fortification, which has been preserved. It was named after enemies, besieging town during the Thirty-Year´s War in the 17th century.

It is a renaissance arcade wall made of bricks with a battlements. It was built on the town mural wall made of stone. Originally, it was the wall of the prince´s corridor, built by margrave Jiří Hohenzollern.  The prince´s corridor started in the castle, went through the Upper gate, the provincial house and finished on the land border belonging to the castle. A deep ditch was dug up in front of the wall and filled up with water.

In the second half of the 20th century, this wall remainder was considered to be demolished. This did not happen due to the fact that Swedish wall covered and partly supported ugly sheds and cots, whose owners were strictly against their demolition.

While digging the basement of grammar school building in 1876, sandstone base of pillars, built by the entrance into the prince´s garden were found.  In 1922 they were placed in front of Swedish wall.  On the left base there is statue of a boiler player, a female flutist, another musician and a dog. On the right base there a statue of a male flutist, another musician and a lion. 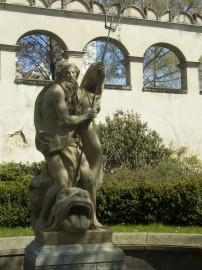 A fountain, located in front of  Swedish wall, comes from the castle in Slezské Rudoltice from 1750.  It has got a squared floorplan with a sculpture of Neptun in the centre. Krnov town gained the fountain in an auction, when Albert of Hodice, thank to his silly life, got in debts. The sculpture of Neptun had to be removed in 1995. It was restaured in a sculptor Jan Gajda´s studio in Nová Ves u Ostravy. The sculpture is exhibited in the House of European Union in Hlavní náměstí. The statue placed here is a replica, of course.

At the place of today´s grammar school, there used to be a provincial house, belonging to the castle. The building was a part of town fortification. Prince´s corridor, leading from the castle to St. Martin´s church,  used to go through the first floor. After Silesian war, the building lost its importance.

The greatest fire of Krnov in 1779 damaged the building significantly. It was reconstructed according to a design of a Lichtenstein court architect Jan Kryštof Fabich.

Later the provincial house transformed into a distillery and a toll office. In 1876 the building was completely demolished and at nearly the same place, the building of contemporary grammar school was built between 1876 and 1877. The lands for construction were provided by Prince Jan II. of Lichtenstein.  A solemn opening ceremony of the new school building took place on October 4 1877 and it was a great occasion for Krnov. New flats for a principal and a school carataker were located in the building. Two classrooms on the groundfloor were reserved in 1887 to establish a numismatic-archeological collection. Since 1877 the building operates as grammar school.