The theatre was firstly mentioned in the 16th century. Also English actors with the Shakespeare´s play were said to perform here in the first half of the 17th century. An operetta was performed in the local stage of Tiroler hotel (today´s Slezský domov).

Due to inconvenient conditions, the town council together with the mayor Richard Andratschko, started thinking of building up a new theatre. At the turn of years  1926 and 1927, the town challenged an architect  Leo Kammel (1885-1948),  who was born in Kamenický Šenov and was also a student of an important Czech architect Jan Kotěra. Leo Kammel  is the author of an expressionist theatre building in his home town Kamenický Šenov, the theatre building in Krnov and a bit younger cinema building in Nový Jičín. 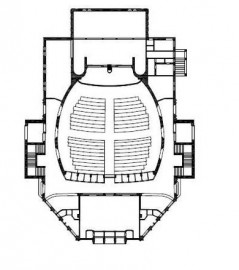 The very first Czech performance was held on November 12 1928. It was “Prodaná nevěsta” by Bedřich Smetana, performed by Prague National theatre ensemble.  The first German operetta was held on November 15, it was a play by an Austrian composer Julius Bettner and a librettist Enst Descey -  Der unsterbliche Franz. 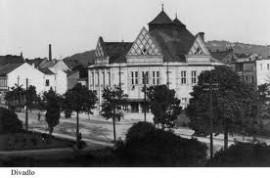 Kammel situated the theatre into a diagonal position just at the streets´ corner, which refered to the expressionist architecture. He also picked all architectonical elements and details as an expression of dynamism  of differently skewed and rhomboid shapes.  This was the theatre of a proscenium type with a sloping auditorium on the oval floorplan, with drawdown stage and a modest background, to be intentionally extened in the next decade.  In the rear side of the hall, there is a ferroconcrete balcony, under which a segmented arc of 12 lodges, divided by a centering corridor is situated. In the balcony, the architect designed 11 lodges just behind the front parapet and also 5 rising rows on the side of projection booth.  In the middle of each side wall of the stage, the architect designed two separate lodges with stylish expressionist baldachins, intended for the mayor and other honourable guests. These lodges were unique because of their great view to the stage.

The original name of the theatre was “Lichtspiel und Stadttheater / The town cinema and theatre. This name was also used shortly after World War II. After the communist putsch in Febrary 1948, the official name was “Theatre of Julius Fučík”. The cinema was after 1945 known as “National”. In 1990, the theatre name was changed again to “The town theatre of Krnov” and  Fučík´s bust was removed.

Present of the theatre

At present time, the theatre is under the administration of local information and cultural centre (MIKS). 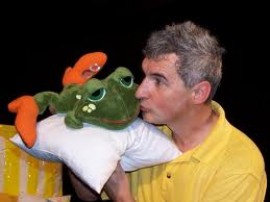 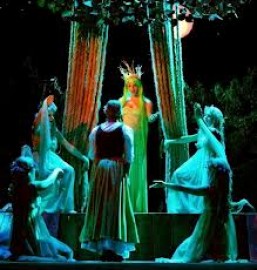 The offer of pop music concerts is also very wide and the fans could visit concerts of such singers as Lucie Bílá, Hana Hegerová, Ondřej Havelka, Jaromír Nohavica, Richard Müller, Helena Vondráčková, Věra Špinarová and many others. Very popular are also performances of comedians (Miroslav Donutil, Miloslav Šimek, Karel Šíp, Josef Náhlovský) and shows (i.e.  the Screamers). The offered range is very wide and comes from audience demands. However, demands have to respect technical parameters of the theatre and financial aspects of organizers.

Interior of the theatre

The theatre entering point is a vestibule, whose ceiling is covered with a plastic raster with socket bulbs. 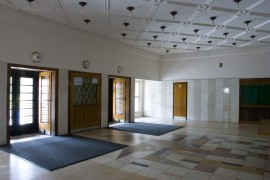 A tiled floor is made of stone boards of various colours and comes from 1960´s or 1970´s modifications. In the vestibule, there are three doors leading to linking corridors with cloakrooms.  In the front wall there are thirteen doors leading to the lodges (the bottom part of the auditorium). 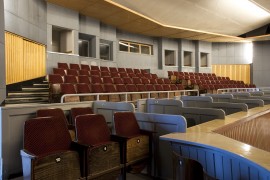 The stage is 13 m wide and 9 m long. The playing area is 10 m wide. At present time, there are no holes in the stage, just one ascent from the souterrain. 4 out of 18 hauls with a loading capacity of 160 kg, are powered.  The capacity of an orchestra area is about 30 players. 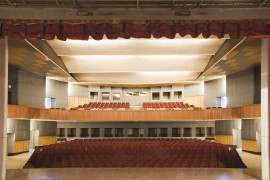