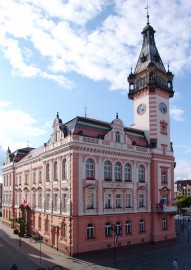 A town hall, standing here since 16th century, is a dominant of the town centre. The present town hall is newer, built between  1901 and 1903. The town hall is a two-storey, three-wing building with a mansard roof. Main frontage with an entrance is situated towards south.  A short western wing is concluded with six-storey tower in the north, where the last storey makes a gallery with corner bay windows.  The tower is concluded by a high hipped roof with a lantern. A roof covering is stack in a very interesting colour way.  The tower is 52 m high and it is a copy of  town hall tower in Währing ( located in 18th district of Vienna). 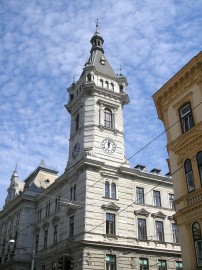 The town hall clock comes from 1864 and it was constructed by a famous Münich watchmaker J. Mannhardt. The town hall building is linked with irregular, three-wing, two-storey building of savings bank.

Diameter of town hall clock is 192 cm. A large hand on the dial is 118 cm long, a small one is 88 cm long.  The size of Roman numerals is 30 cm. When ticking minute by minute, the hand moves by 9 cm. When ticking hour by hour, the hand moves by 47 cm. The town hall clock is located in the height of 33 m. The total tower height, where the clock is located, is 52 m.

At the moment, the observation tower is not accessible for public. However, the town has taken some preparatory steps for its opening to public.  Click here to see the tower interior and how the town hall clock works:

Savings bank was established in  1869 with a seat in the town hall building. Due to small premises, savings bank was consider to have its onw building. This was built between  1906 and 1907. In the building you can see many sculptural and artistic elements such as stained glass, stucco and an artificial stone. The main relief you see, symbolizes work activity and thrift. The building operates as a savings bank up to now.  An art Noveau café and a wine bar is the part of the complex, however it is still waiting for its renter.

Crime activities and crimes have attracted attention in any period and any society.  Many centuries ago, there lived various impostors, thieves and murderers in Krnov. Therefore, the town hall used to operate as a court, whose members were elected of councellors and a reeve. They judged criminals, including capital punishment.  A gallows stood at the end of the town, at cvilín hill. An executing instrument was a sword. The last krnov executioner was Ignác Jausch. He quit this activity in 1787 when  emperor Josef II abolished capital punishment. The executing sword from 1709 is exhibited in Krnov museum depository.  Executions were opened to public, with many nosy viewers.   At the edge of the hill, there was a carrion hole, where the executioner buried also dead domestic animals of local people. It is said, that children in the 19th century dug up remains of bones in this place, fastened them on their legs and skated on rivers.

Another curiosity is the preserved police order from 1551, determining rules, such as:

- Because of its characteristic odor, brandy was not allowed to be sold inside, but outside only

- A waitress,  who did not pour the glass properly and cheated guests, was immediately punished 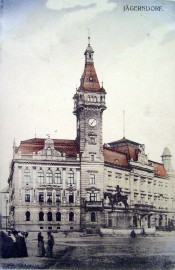