The present of the villa

At present time, the owner of the villa is PEGA – VEL, a  joint-stock  company in Krnov.

History of the villa

Since 1911 Alois Chlupaček was the co-owner and after his father´s death the only owner of the company Johann Chlupacek and Son, one of the largest textile companies in Krnov. In  1923 Alois Chlupaček appointed an architect Leopold Bauer to work out a project for a family villa reconstruction. There were two axisymmetric buildings built after 1891. In the first villa, Alois Chlupaček, his wife and three sons lived, in the second one, a company founder´s widow lived. Alois Chlupaček was also known to be a passionate collector and admirer of art.  Concerning the reconstruction, the final word had factory owner´s wife, as an architect Bauer revealed. At the beginning, Bauer suggested to build up a new building, but in the end he decided to join both buildings.

Bauer wanted to fill the space between the buildings with a large hall of an oval floor plan. In final design from 1923 he reduced the space to place a dining room and a lounge into a rear wing. A flat roof showed a modern origin of the extension.  Bauer used comfortable materials, richly furnished interiors he put together consequently and called it “a spatial sequence”.   Bauer´s aim was that the crossings between rooms were full of experience, were not boring – but just the opposite – aroused the interest. Guests entered the villa with side door into a small vestibule, tiled with  marble and a painted ceiling. Then guests continued to the hall. The space of the hall is 14 m long and 6 m high and it was divided into two levels linked with a staircase.  In the bottom hall used for social representation, stained glass windows with “Charming flute” motifs by Vienna painter Franz Wacik dominated. 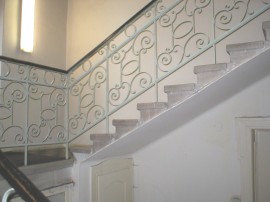 The upper hall was more of an intimate character. Its heart was a fireplace, whose relief was made by a sculptor Paul Stadler. From the upper hall you could enter a dining room and a saloon. The dining room was furnished with English  neoclassical furnishings made of a walnut wood, the walls between stucco pilaster were covered with a yellow silk. In the saloon, a piano dominated and the furniture was made of a mahogany wood.  The back wall was broken through with a wide hole leading to another room with a fireplace and a corner sofa. Side wings of the villa had their own halls. In the left wing there was, except bookcase, also a children´s room and a bedroom. In the right wing, there was a living room, a bedroom and a kithcen. This reconstruction of the villa took almost a year (1923-1924). 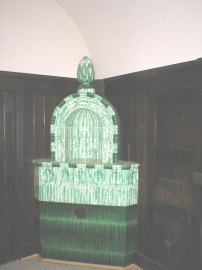 In 1925 Bauer also designed “a rural room” and the next year the reconstruction was finished up. 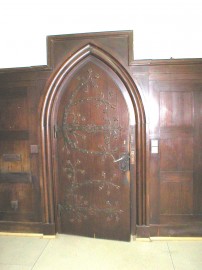 During the occupation the factory owner did not want to get divorced with his wife because of her Jewish origin. Therefore Nazis confiscated his property. After liberation, his son Jan became director of the company. Nevertheless, after the communist party being in power in 1948, he emigrated to Vienna.

Later, the villa was a property of S. K. Neumann company, which used the villa, among other, as a company doctor´s office. At present time, the only owner of the villa is PEGA-VEL company. The building is a real cultural monument.