At present time, the villa operates as a health centre. 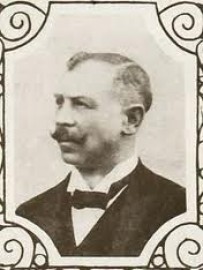 Jacob Geiringer  (April 6 1862 – November 28 1930) was a very important and successful textile industry businessman in European market. Together with Gustav Retler, he established a company dealing with a woven goods. After Gustav Reitler´s death in 1917, he took control of the whole company. Jacob Geiringer married to Herminna Pollak and they had four sons. The youngest son, Leo Geiringer, studied a textile school in Brno and then he was involved in a fabric trading.

Jacob Geiringer and Gustav Reitler had “the palace of Silesia” built for their fabric trading. Today it is called “The Silesia palace”.   It was built in 1907 by Edward Frank.  The hall on the ground floor was used for trading, on the shelves the leather and fabrics were stored. The basement premises were used as goods storage.  The palace is situated on the left side of the villa.