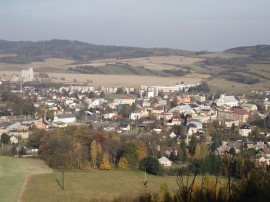 History of the town

Albrechtice was first mentioned in 1377 in the charter dividing the Opavian principality after prince´s Mikuláš II death. The current owner of Albrechtice was Linhart from Rovný.  Since 1390 the manor of Albrechtice was owned by the margrave Jošt, after that sice 1420, the manor was owned by a honorable knight´s family of Stoš.  Jiří Stoš, ruling alone since 1450 was famous for being a brave warior.  He was fighting for Jiří from Poděbrady and later for Vladislav against Matyáš Korvín.

In 1474, Matyáš´s troops came to Silesia to punish supporters of Jiří from Poděbrady.  Albrechtice fortress was besieged for two days, conquered and damaged, its defenders were killed.  With an intercession of Wroclaw bishop, Jiří Stoš was reprieved and exiled out of the country. The manor became King Matyáš´s property.  After Stoš family, since 1942 Albrechtice was under the administration of Makrot family. On request of Adolf Makrota, a Czech king Vladislav II promoted Albrechtice to become the town and gave it some privileges.  In 1503, the manor was bought by Jiří Sup from Fulštejn. After his death in 1572, the manor came under the administration of her daughter Alžbeta, who married to Jan from Valdštejn, the son of an old Czech family. Shortly after that, Biskupice village was established in the manor.

In 1592 the owner of the manor was appointed Alžběta Supovna from Fulštejn. Later, the manor was given to her son, Jan Kryštof. In battles against Habsburgs, he fought for the army of King Bedřich Falcký. After the battle at Bílá hora, he was exiled out of the country and his manor of Albrechtice was confiscated in favor of the imperial court.

In 1623, the manor was taken over by Jesuits from Nisa. After 1625, Jan Kryštof came back and took control of the manor. He forced Jesuits missionaries out the the manor. Unfortunatelly, he was arrested by an imperial army and taken to Hrubá Skála castle in Bohemia, where he was imprisoned for two years. Valdštejn settlement located northwest of Albrechtice is the only memory to his tribe.  Then, the Jesuits came back again.

In 1716 Albrechtice was promoted to a free manor by Karel VI. Later in 1745, the Jesuits from Nisa passed the manor on Opavian Jesuits. The Jesuits owned the manor till 1773, when it was taken over by Imperial-Royal court chamber. The empress Maria Theresa promoted Albrechtice to a municipal town in 1776. It meant that the town had its own autonomy and jurisdiction.

Local people suffered a harm during wars of Bavarian heritage. In 1779, about 16 thousand of Prussian soldiers, who sniped the town from Šibeník with howitzers and cannons, passed Albrechtice. Prussians occupied the town. Austrians pushed out of the town, got backups and forced  Prussians out of the town. The town just shortly after getting over the war, the river flooded whole town and the valley, so that people escaped to Žáry and Burkvíz. That was in 1813. .

Albrechtice was bought by Karel Traugot, a free lord Skrbenský from Hřiště in Hošťálkovy. Just one year later, he sold it to merchants of Opava, Vincenc Tlach and Vincenc Keil. They established a rolling-mill at the edge of the town, where they employed many local people.

The symbol of Město Albrechtice 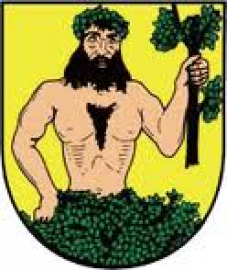 The town was given the symbol by an emperor Ferdinand I on August 4, 1563. The symbol is described as a bearded man standing behind a bush and holding a branch of a white poplar.  The stamps, however, pictures a beardless man with some fence in front of him. The bottom of a golden shield is filled with green bush, behind which a half naked man is standing. He is wearing a green wreath on his head and around his loins. He is holding a tree branch with leafes, his right hand on his hip.

A parish church of Virgin Mary Visitation is a dominant of Město Albrechtice. It is a late baroque modification of the original church from 1610, which burnt down in 1746. It is a one nave church.  The western frontage of the church makes an architectonical dominant. The frontage is reversed towards the square and it is also highlighted with eight-side tower. 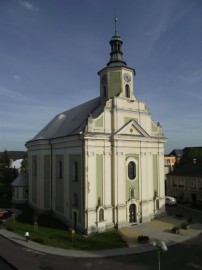 The original bells are not preserved and it is also impossible to get some detailed information about them.  In May 1909, the following bells were consecrated: Marry (593 kg), St. Family (310 kg) and St. Frantisek of Assisi (190 kg). These bells were requisitioned during World War I. In September 1925, these were replaced with four bells cast by a workshop by Rudolf Perner nearby České Budějovice in South Bohemia: St. Michal (1100 kg, diameter 118 cm), Marry (500 kg, diameter 95 cm), Jesus (300 kg, diameter 80 cm). At present time, there are four bells in the tower of this church and they all are cultural monuments.   In 1947, 23 restitution bells were given to Krnov district, which were consequently addressed to parishes of Krnov Deans Office. 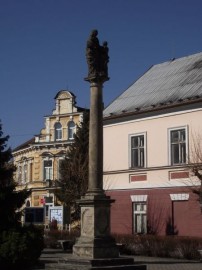 One of a unique sculptural monument is St. Anna column from 1719. Jan Ambrož Kravutschke, a village representative and businessman, had this column built at his own costs.  An inscription on the stand is as follows: “ Virgin Mary, We wish to praise you for ages, you are the one who accept the poor, God woman.  Let´s give the glory to Great God as well as Jesus. Protect Albrechtice forever, Saint mother Anna”.

About 10 m away from a baroque column, the empire house no. 21 is situated. The ground floor of the house has got a renaissance core from the second half of the 16th century, including the corridor with a cross vault.  The house was rebuilt and modified in an empire style in 1806.  The building used to be the seat of a district court. Untill 2002 the building served as a library. There is a plastic inscription on the library façade  „Providente Deo Omnia Fausta“ (“With the help of God, all will be well”).