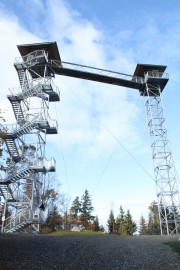 A lookout tower is of a unique iron frame, consisting of two areas connected with a metal footbridge. The lookout was opened in autumn 2011. It is located nearby Czech-Polish border in Město Albrechtice locality. To access the lookout, follow the blue touristic marking from Město Albrechtice and farther, circa 3,5 km away from the town. The lookout tower is located on Hraniční peak, which is 541 m above sea level, its height is 25 metres. To get to the top, there are about 149 steps to be climbed. 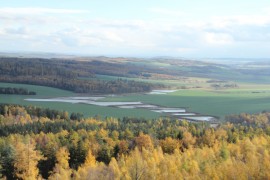 The lookout offers panoramic views to the countryside towards Krnov, Třemešná and Poland. Admission is free of charge, with no attendant and it is opened all-year-long.. A lookout access is prohibited within the night and in case of reduced visibility, hoarforst, snow coverage, strong wind, rainy or stormy weather. In case of accessing the lookout tower at above mentioned circumstances, a visitor takes his/her full responsibility and no consequences will be born by both its manufacturer and the owner, concerning health and safety. 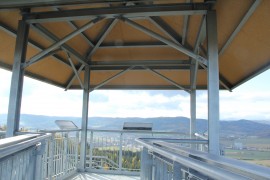 In 2006  Město Albrechtice became the owner of two towers, originally intended for signal transmission by Telefonica 02. The towers remained unutilized for a long time and they were to be demolished.  After long negotiations, Telefonica O2 agreed with an offer by Město Albrechtice and sold the tower for a symbolic price CZK 1000. It was decided to modify the towers into a unique lookout with a steel construction.  With very low costs, lookout with two observing areas connected with a metal footbridge in height of 25 m was built up. Possibility of such a modification was evaluated by a structural engineer Stanislav Danek in 2007. All aspects, especially technical estate and a carrying capacity of the steel towers, were considered. The final project for construction was worked out by a designer Rudolf Hon in 2009. 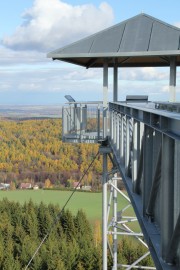 In 1980, towers were built up by a national company “ Správa pošt a telekomunikací Praha” (since 1993 named  SPT Telecom) for wireless transmission of landline signal network between Krnov and Město Albrechtice (chepar than cables) At that time, there were no mobile phones so the towers were really used for mobile phone signal transmission  in NMT network since 1991 by Eurotel company. 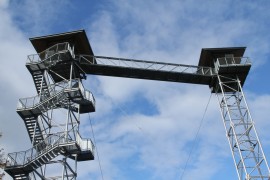