Total lookout height, including the flagpole, is 17,5 m. The floor height at level of the last storey is 13,6 m high. The construction of the lookout is made of a larch wood with a cubic capacity  11,5 m3    of timber and with height about 7400 kilograms. The lookout is freely accessible.

History of the first lookout

The lookout is situated on the peak called “Vyhlídka”, with a former name “Melzerberg”. At the same place, there used to be a lookout since 1894. A timber-framed tower, which was the very first lookout in Krnov region, was built by Krnov section of Moravia-Silesian mountain corporation under the leadership of a railway inspector Johann Haluska. 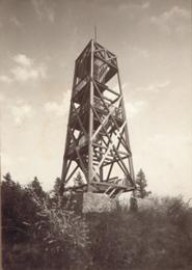 In the first few years the lookout was very frequently visited by tourists. In 1903 visitors´ interest turned into another lookout built in Krnov – Cvilín lookout, which was closer the town centre, more comfortable and provided more beautiful views to the surroundings.  Moreover, the wooden construction extensively suffered from climatic influences and went slowly to the bad. In the period of the first Czechoslovakia Republic, the lookout was not freely accessible and at the end of the 1920´s it had to be demolished due to its poor estate.

The second lookout, built by a local beautification club and having almost the same shape as the previous one, was built in spring of 1934 and it was opened to public on May 13. It was operating till the beginning of the World War II.  During the war, there was no financial support for its maintenance and after the war, it became forgotten. The lookout dilapidated very quickly and came to an end at the turn of 1960´ and 1970´s. 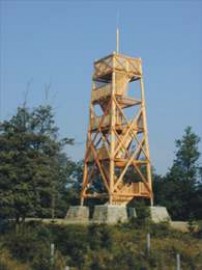 The third (the present) lookout

After about 30 years, thank to the support of town council and local forest company workers, the lookout was back at its previous place. The intention was to renovate the lookout in its original way. It was not easy because the original documentation failed to preserve. The design was work out based on period photographs and  original construction remainders. The new construction started in April 2001 with demolishing of the original basement.  After an access path adjustment, which enabled the access of construction machinery, the new basement was build up in May. 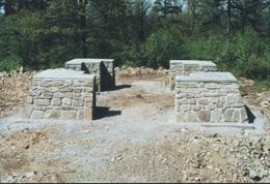 A wooden construction is completely made of a thorougly selected larch wood, coming from local forests.  Cutting and preparation of wood was done in two sawmills, all works had to be done with a high precision. After finishing and ripening of concrete basement was whole tower – now in a form of carpentry elements – transported to Vyhlídka and its assembly started.  In July, during three months, the whole construction was assembled. It took more time to finish carpentry works on staircase, railings and floorings.

Click here to see the lookout after its finishing.

In the southeast you can see the area of broken trees caused by tornado, which swept across here on June 18 2013.