About a natural trail 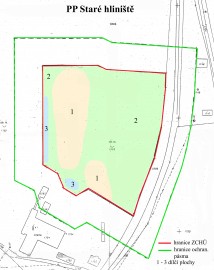 Staré hliniště is a natural monument, located about 2,5 km northwest of Krnov town centre. It is located at the place of a former brick factory and a neighbouring stonepit, not far from the road heading to Czech – Polish border crossing.

Hliniště has got an area of 4,39 hectares.

A little from history 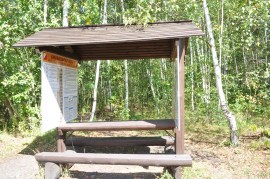 At the turn of 70´s and 80´s the brick factory was completely demolished and only two buildings remained. The mining hole had overgrown before. Initially, the locality operated as a studying area and later in 1989 it became a natural monument thank to its rare amphibians and some plant spieces.

In 2001 a local municipal office had a herpetological and botanical survey carried out.  The research confirmed the fact that the endangered species of amphibians have suitable existential conditions for living in Staré hliniště area. They exist in a very limited number such as smooth newt, alpine newt, crested newt, common toad or tree frog.

Besides amphibians, also  rare plants occur here (orchids - which are not original – they were replanted here).

The locality is very popular with local people. In autumn Staré hliniště becomes a mushroom paradise because an orange-cap boletus grows here.

The area of steady checking points for orienteering 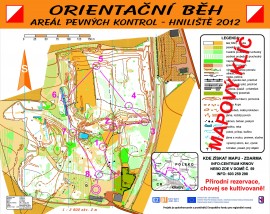 The area of steady checkpoints for orienteering enables to wide public to try out the sport, whose slogan is “Natural adventure”. There are a few checkpoints in the area of Staré hliniště, marked with a red-white square. A special map for orienteering is possible to be picked up at this place, Petrovická 251 Street, Krnov and now you can  experience  orienteering.