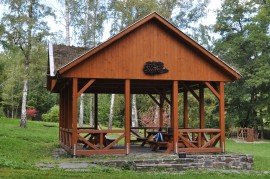 The project of a forest resting arose with the support of people who took part at the round-table meeting organized by local forest administration and Místní agenda 21 corporation.  About 50 people involved in the matter joined the discussion of what should the forest resting look like. An architect Petr Ondruška then worked their proposals and suggestions in to the project. This meeting also gave the glade its name – one of the working groups proposed the name “Ježečkův”.  Except mobiliary installation, also a greenery underwent an extensive reconstruction. New trees were planted at the glade – larch, maple, spruce and hornbeam. Solitary shrubs such as hazel, hawthorn, privet, viburnum, chokecherry and also wild perennials were also planted.

To build up the forest resting was one of the last steps in the project of leisure time activities in Krnov suburban forests, which cover an area of 482 hectares.

The forest resting is equipped with a shelter, totem, fireplace, benches, orientation boards and bridges over the Ježnický brook.

“Ježečkův” glade is opened for public since 2008.

If we go on from “Ježečkův” glade towards Sanatorium, in the forest we can find “Jelení” spring (about 2km).

“Jelení” spring well (originally called Hirschbrünnlein) is located in forests belonging to Krnov town.  It is also the spring of Ježnický brook. It is marked on the map between Bednářský hill and Svinná hill. You can reach “Jelení” spring well if you go along the path from sanatorum in Ježník locality towards the road connecting Brantice and Radim.  The distance is about 800 m from Sanatorium. Employees of local forest administration look after the spring well and it is a favourite touristic point of people visiting Ježník locality.