The width of the gauge railway is 760 mm. The starting point is Třemešná ve Slezsku, the terminal is in Osoblaha. 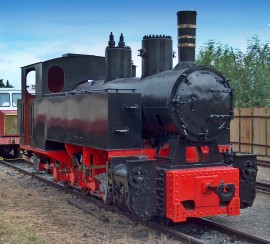 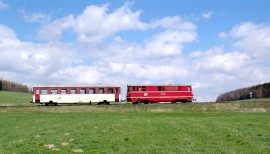 The beeline between Třemešná and  Osoblaha is  15 km. By train the distance is 5 km longer.  The railway meanders in relatively straight parts and it is 20,218 km long. It is said that the reason for  extension was then restrictions regarding railway construction in Austria, which allowed railways more than 20 km long only. However, this saying is not based on the truth. Not far from Osoblaha, a railway between Ondrášov and Dvorce was built in the same year, with the length of only 11 km. It was the railway with similar purpose and the same owner.  The real purpose of the meandring was probably an effort to adapt the railway to the surrounding landscape with the lowest costs. 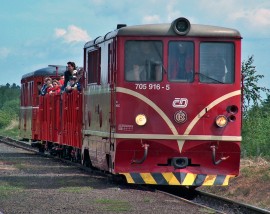 Shortly behind  Třemešná village, just behind the first rise, the train starts significantly slowing down. It reached 2,2 kilometer of the distance with the speed limit just 20 kmph.  The reason is that this is the place of the steepest railway arc in the Czech Republic, with  diameter of only 75 m. After crossing this point, accompained by the wheels´ creak, the train speeds up again to usual 30 kmph and then to 40 kmph.

For more information regarding the railway visit  www.osoblazsko.com/zajimavosti

The first railway in this area was built in 1872. It was a diversion of Moravia-Silesian central railway (MSCD) from Krnov to Glucholazy. This railways led far from Osoblaha and  local sugar  factory needed transport connection for import and export of its raw materials. Designers chose a narrow-gauge of 760 mm, because the railway adapted better to the landscape and the costs were three  times less.  For Osoblaha sugar company the convenience was that raw materials grown in the region were cheaper to import to Osoblaha by train than complicated transhipping  on  a standard gauge and transport somewhere else. The railway construction started in spring of 1898 and the first train set off on December 14 1898. 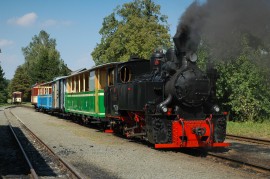 Cargo trains were canceled on May 31 1997. Nowadays the cargo services are not available any more.

After 1945 the railway was to be closed for its low profitability. For the first time, at the end of 1950´s due to engine fleet´s poor estate, for the second time in 1970´s,  when railways  Ružomberok – Korytnica and Frýdlant v Čechách – Heřmanice were closed and for the third time in 1985, due to poor  estate of the railway top. Fortunatelly, there have always been some reasons to keep the railway operating. Between  1986 and 1988, a total railway reconstruction was held. “Osoblažka“ railway got a new top with unusual masive rails. Thanks to that this narrow-gauge railway got its unique appearance that lasts up to now.

In 2003 the first steam engine narrow-gauge railway company was established. The company tried to highlight both  region and the railway.

The season in 2004 was a trial season with special Saturday´s trains of later SZD.

The railway day in 2006 introduced three innovations in SZD fleet. The first one was a motor engine, the second was an open summer carriage and the third was a service generator carriage.

In 2007 “Mikulášský train” was introduced. This train complemented another out-off-season train ride which operated at the beginning of November on the occasion of Martinský feast in Bohušov.

In 2010 another new engine was introduced at  Osoblažka railway.  An engine fleet was complemented with a bike carriage – the carriage used for bike  transport. Time has shown that this was the right decision – it is also used for pram transport. 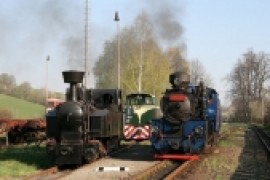