In beginning of 30´s of the 16th century, about 40 evangelical communities arose. The education was newly systematized and a special attention was paid to youth. During the reign of margrave George of Brandenburg, schools in Krnov and Hlubčice were promoted to be higher state schools.  Except religious education , other subjects such as Latin, grammar, dialects and especially musical education were taught. 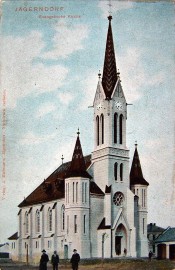 Between 1880 – 1887 the number of Evangelists increased rapidly in Krnov. Therefore a building up a new church was intented. On April 29 local Evangelists were given the permission to start the construction.  The ground was bought from the prince of Lichtenstein.  The project was worked out in Ernst Latzel´s company, which later also realized the construction. Plans were drawn by an architect Blasch, who worked for Latzel. The budget for church was estimated to be  32,000 Austrian Crowns and for rectory it was 25,000 Austrian Crowns. A solemn laying of a basestone took place on June 28 1901. 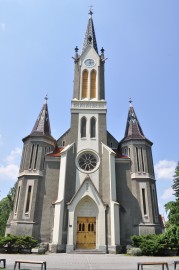 The church was built in a Newgothic style. In the tower, which was 52 m high, three bronze bells were fixed.  An organ manufactured by  Rieger - Kloss company had 22 registers and two manuals with one pedal.  Windows above the altar were coloured, in the middle window a blessing Christ was captured.   Then mayor Friedrich von Hake had a merit to gain necessary financial support for the church. 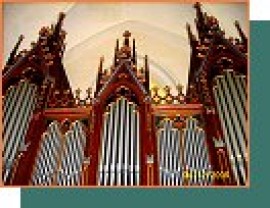 The church was solemnly opened and sanctified on June 26 in 1903, which is a name-day of Petr and Pavel. The chorus involved 700 members.

During World War I., all three bells were taken off the church and used for military purpose. In 1971, the church roof underwent a necesessary repair.  In the same year, a new preacher Bronislav Kielar joinded the church. During his service between  1975 – 1978 the church underwent thorough interier modifications. The church got connected to the local sewerage system,  also a new façade was done and a roof covering was fixed on the church and the tower.